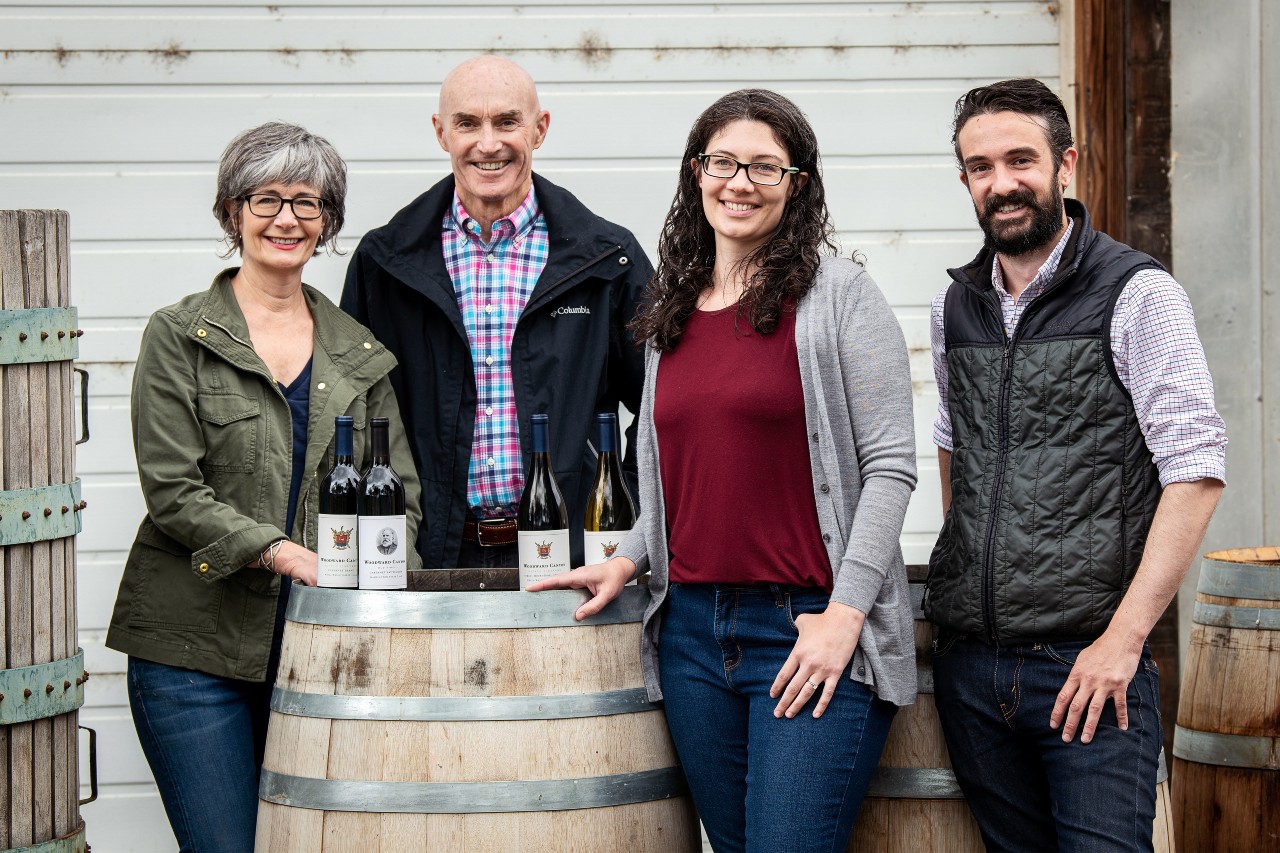 Darcey Fugman-Small, Founder / Co-Owner:
In 2000, after twenty-two years working for Walla Walla County as a planner and Planning Director, Darcey took the position of General Manager at Woodward Canyon. Over the years she has been very involved in the community serving on a number of boards and advisory committees, including the Downtown Walla Walla Foundation, Planned Parenthood of Walla Walla, the American Association of University Women, United Way of Walla Walla, the Walla Walla Public School District's Facilities and Math Curriculum committees, on the founding Walla Walla Valley Wine Alliance Board and was former Chair of the Carnegie Art Center Trustees. She is currently serving as a Trustee of Walla Walla Community College.

Rick Small, Founding Winemaker / Co-Owner:
Agricultural interests come naturally to Rick Small, raised as a part of an Eastern Washington wheat farming family. He attended Washington State University, earning a Bachelor of Science in Agriculture from that institution as well as studying in the School of Architecture, before returning to Walla Walla and the family business. Beginning in the mid-70's he developed a personal interest in winemaking. In 1977, Rick began planting vines on former wheat ground on the family farm in Woodward Canyon. He and his wife Darcey Fugman-Small founded Woodward Canyon Winery in 1981. Rick is essentially a self-taught winemaker, reading numerous texts and learning by doing. His approach to winemaking is that of an artisan, and he believes that the key to even higher quality lies in the vineyard. With Kevin Mott's employment as winemaker in 2003, Rick has turned his primary attention to hands-on oversight of viticulture techniques at the Woodward Canyon Estate Vineyard, as well as in contracted vineyards. Rick was President of the Walla Walla Valley Wine Growers Association, the precursor to the Walla Walla Valley Wine Alliance, when the growers petitioned and received approval from the federal government for the Walla Walla Valley Appellation in 1984. Rick was a member of the Washington Agriculture and Forestry Education Foundation and served on its Board of Directors as well as the Washington Wine Institute. He is a former Chair member of the Washington Wine Commission and has served on the Washington State University and University of Idaho's Food Science External Advisory Board. Rick currently serves on the Walla Walla Community College Viticulture and Enology Advisory Committee. Anyone who has attended Holiday Barrel Tasting knows that Rick is an avid baker.

Jordan Small, General Manager / Co-Owner: Born and raised in Walla Walla, Jordan grew up in the wine industry running around the dusty hills of the Woodward Canyon Estate Vineyard with her brother Sager, washing glasses during event weekends, and spending summer vacations bottling at the winery. After graduating from Lewis & Clark College in 2006, Jordan returned to Walla Walla to start a career in the wine industry, working in many different capacities from managing sales at Tertulia Cellars to running the lab at Long Shadows Vintners. She officially joined the Woodward team in 2013, and was promoted to Director of Direct to Consumer Sales in 2018. She took on the role of General Manager in 2021. Continuing the family tradition of community involvement, Jordan was elected to the Walla Walla Valley Wine Alliance Board of Directors in 2019, and currently serves as board President. She lives in Walla Walla with her two sons, and in her spare time she enjoys gardening, traveling, cooking, and reading.

Sager Small, Vineyard Manager / Co-Owner:
After attending culinary school in Seattle at the Art Institute, Sager spent the next ten years working as a line cook in numerous French restaurants such as Rovers, Luc, and Cafe Presse. During this time, he developed a deep appreciation of the synergistic values that food and wine can bring to one's life. Upon returning to Walla Walla, Sager served as Woodward Canyon's resident chef and enrolled in the Walla Walla Community College Enology and Viticulture program. Since graduation, Sager has transitioned into managing viticultural practices on the Woodward Canyon estate vineyard and aids in producing small-lot wines with his father Rick. Sager also sits on the advisory committee for the Walla Walla Community College Enology and Viticulture Program as well as Vinea's Walla Walla Valley Certified Sustainability program. When Sager is not working he will likely be found fly fishing, playing guitar, gardening with his dog or spending the afternoon at Brassier Four with his partner Selena and daughter Filomina.

Kevin Mott, Director of Winemaking:
Kevin Mott graduated from The College of Idaho with a degree in Chemistry. He began his career in the wine industry in 1986 at Ste. Chapelle Winery in Caldwell, Idaho, progressing from Cellar Worker and Laboratory Technician to Winemaker. In 1999 he was responsible for the development of Chalone Wine Group's Sagelands Vineyard in Washington's Yakima Valley and acted as General Manager and Winemaker until moving to Canoe Ridge Vineyard in 2002. Mott served as Winemaker there, overseeing both winery and vineyard operations. He came to Woodward Canyon in the summer of 2003 as Winemaker. In 2011, Kevin became a shareholder in Woodward Canyon.

Rafa Sifuentes, Assistant Winemaker:
Rafa started his long career at Woodward Canyon working in the Estate Vineyard, which he continues to help manage today. Rafa was Cellar Master for 16 years before being promoted to Assistant Winemaker in 2018. Rafa and his wife have three beautiful children.

Jaymee Leamer, Chief Financial Officer:
Jaymee received her BBA from Pacific Union College and started her career as a tax accountant at Dillwood, Burkel and Sully. After her three years in the public tax accounting field, Jaymee decided it was time for a change of scenery and chose to move into the wine industry. She began working at Woodward Canyon in 2012 and has been enjoying learning all there is to know about wine. In addition to accounting, Jaymee enjoys cooking, horseback riding and spending time with her amazing family and friends.

Selena Kritsonis, Director of National Sales:
Selena moved to Walla Walla in 2015, drawn to the allure of living in food and wine country and her partner Sager’s promise to adopt a puppy. Her enthusiasm for food, travel and history has led her to work in restaurants and bars around Seattle since graduating from the University of Washington (with a degree in Law, Societies and Justice) and even to study German in Berlin. Being attracted to passionate, innovative people who take pride in making quality wine while also being responsible stewards to the land, it was a natural fit for her to be part of the Woody team. In addition to her position at the winery, she is on multiple committees for the Walla Walla Valley Wine Alliance and board member for W2U. Currently in her free time, Selena is expanding her wine knowledge while running around town with her toddler Filomena.

Michelle Aichele, Director of Wine Club and DTC Sales:
Michelle comes to us from Walla Walla roots. Her family’s involvement in the industry is what sparked her interest and career here, beginning in 2006. Over the last 16 years she has refined her skills in operations and winery management. She segued from her degree in education from Washington State University to follow her passion and love for Walla Walla wines. She and her husband have continued to share their personal love of the outdoors and exploring the wonders of the Pacific Northwest with their young son.

Cory Benz, Hospitality and Tasting Room Manager:
Cory moved to Walla Walla to start her second career at Woodward Canyon. She worked many years for Pendleton Woolen Mills at their corporate office in Portland as their Womenswear Merchandise Manager.  The lure of life in a small town, surrounded by world class wine, was just what she and her husband were looking for. Cory enjoys gardening, entertaining and drinking wine!